The unexpected hiding places of sources in genealogical research

Who would think that a painting from a church would reveal a complete family history?

In 2009, we researched the German ancestors of the popular Australian cook Maggie Beer for an episode of "Who Do You Think You Are?" in Budenheim near Mainz. The focus lay on the Ackermann and Krohmann family lines.

In the course of the investigation we came across a painting which had hung in the former Catholic church St. Pankratius in Budenheim. During reconstruction works a few years before, two portraits had been discovered: a woman and a child depicted as an angel hovering above a family father with 5 children. After they had been painted over for many years these pictures were revealed and renovated upon discovery.

During the travels to prepare the filming we also visited the Catholic church of St. Remigius in Osthofen near Alzey where the 12 paintings of the former stations of the cross in Budenheim had been transferred to. The local priest kindly agreed to take the picture showing the crucifixion off the wall so I could take better photographs of it. We were very surprised when we found an inscription on the back of the painting which told the story of how these paintings were donated. It reads:

Johann Krohmann, Mayor of Budenheim, [travelled] the world under great danger unexpectedly after 18 years in Australia, in memory of his happy return with his family in 1872 and the soon occurred death of his first wife Eva Heinz in 1873, he bequeathed to the local church the high altar and the 14 stations of the Way of the Cross of Christ.

This had not yet caught anybody's eye before.

Here is a little detour into the family history: Johann Krohmann had emigrated to Australia in 1854, "returned in 1872 as rich as Croesus" (source: family register Krohmann in the church books of the Catholic parish of St. Pankratius, Budenheim). In Australia he had found a "lump of gold" and travelled back to Germany with his wife and 5 children in 1872. According to a letter kept in the family the journey was so tough that they thought the ship might sink. In this situation Krohmann promised to donate a new high altar and the paintings for the 12 stations of the cross to the church in Budenheim if they should arrive safely. This was no sooner said than done.

Unfortunately, his wife died in 1873 and his son Johann drowned in 1877 when he tried to catch goldfish from a garden pond. Hence these two persons were (subsequently?) immortalized  as angels hovering over the family in the painting of the stations of the cross. This makes these paintings very special. That the families of donators were eternalized in the pictures was common practice in the Middle Ages but was not usual in the late 19th century anymore. 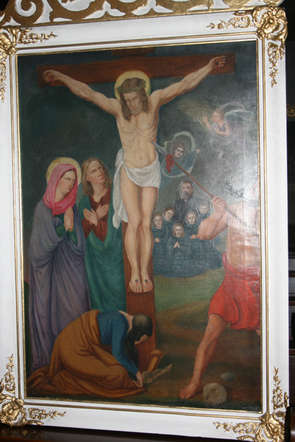 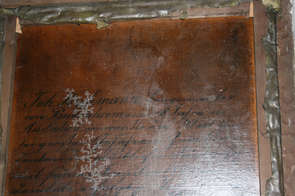 I read with interest your "beyond History Blog" for my great uncle Johann Krohmann.

For the full details of my great uncle please see the folowing websites;