Passports in the past and the present 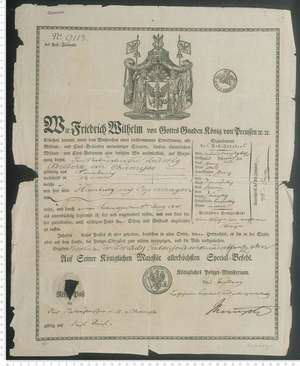 In today’s German passport (the word originates from the Latin “passus”, passage) eight attributes and a photograph can be found.

In previous times – without the photograph – the descriptions and attributes had to be lengthier and more accurate. In the beginning of the 18th century there were 20 individual points of reference to be named. Name, age, nationality and height of the person as well as an exact description on the nature of different bodily parts. Color and completeness of teeth were registered as well as strength of beard hair or lip shape. Especially identifying features like “limping” or “hunchbacked” and even habits and character traits were dutifully noted. Because this level of detail was practiced over several generations sometimes you can learn quite a lot of interesting particulars about famous people. For example it is known that Johann Wolfgang von Goethe had brown eyes and hadn´t turned fully gray by the age of 57.

Nowadays a German passport is valid for 10 years (only five years if you are younger than 25) and it costs EUR 59. The passport originates from the Middle Ages and so does the practice to pay as a traveler.

In the woods and beyond city limits there were quite a few brigands which made travelling a dangerous affair. In consequence the territorial rulers gave out “Geleitrecht” (a right of escort). Travelers were accompanied by armed men while they travelled through their domain. Oftentimes this soon became legal compulsion and the fees that were accompanied with it presented a lucrative source of income for the ruler.

Due to growing numbers of travelers and increasingly small profit margins the armed men were soon cut entirely. Travelers received “Geleitbriefe” (letters of authority) that ensured safe travels and stay in the territory.

The Thirty Year’s War did not only plunge Europe into chaos from 1618 to 1648 but the aftermath was disastrous on many levels, especially on the population structure. This necessitated a binding personal identification document as in the wake of the war thousands became roamers, beggars and former mercenaries roved around, so travel was unsafe. The need for a document arose to discern wayfarers from vagabonds.

The general passport obligation was adopted at the end of the 18th century from France. The French introduced passport obligation after the Revolution to prevent the gentry from fleeing to another country. Without a passport and the necessary permit it was impossible to travel. Of course, nobody wanted to see the guillotines rust.

The German states absorbed this idea, so the passport acquired the function of a traveling document in the broader sense. The Prussian pass regulations of 1813 demanded of people that stayed in one place longer than 24 hours to show their documents to the local police authorities.

Again due to increasing movement of travelers - especially propagated with the construction of train tracks – most states relaxed the time-consuming procedures. The German states waived passport obligation entirely in 1867.

Like most nations the German Empire reserved the right to instigate the obligation again under pressing circumstances. This moment came at the outbreak of World War I. In addition to the personal description of the passport owner a photograph was now required as well and had to be added.

PS: EUR 59 seemed pretty steep for a passport. But if you wanted to acquire one in 1909 a Prussian citizen had to pay 3 Mark. The monthly wage of a normal worker was 50 Mark. In todays currency this would equal a monthly salary of EUR 983,33…