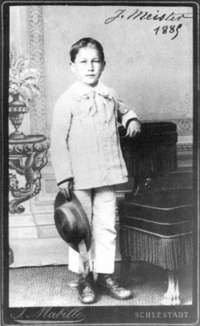 The vaccine came from no one less than Louis Pasteur himself. Pasteur had developed a serum and successfully tested it on dogs, which made newspaper headlines everywhere. Through these headlines the news made it to Joseph Meister’s parents who rushed to Paris with their boy to look for Pasteur. After several dozen injections and a month of waiting, Louis Pasteur was sure that Joseph had not developed rabies. The two of them stayed in touch as long as they lived.

Louis Pasteur’s success had a huge impact on the demystification of the rabies. Their transmission through wolves and dogs had led to werewolf beliefs and in the Middle Ages, the devil himself was made responsible for the fatal illness. Before Pasteur’s vaccine there was close to nothing people could do to help themselves against it but religious or magic rituals like the carrying of charms or prayers to Holy Hubertus, the patron saint against rabies.

On today’s World Rabies Day we can look back on the history of rabies and be glad that medicine today is so developed – back then Joseph Meister was injected the spinal marrow of rabies-infected rabbits.