In the urban region of Hamburg there are for example several granite steles that are unimposing at first glance. But these steles are evidence of the history of Hamburg and Holstein. One of the granit steles is located in the Tarpenbekstraße in the Hamburg district Eppendorf. On it several letters and numbers are written, they might appear cryptic at the moment.

Before riddling the stone’s and its inscription’s meaning, let’s talk about the history of Hamburg and Holstein.

The former territory of Pinneberg

Actually, the former urban region of Hamburg was not as big as it is nowadays. Eppendorf was even then part of Hamburg, but the adjacent Lokstedt belonged to the county of Holstein-Pinneberg. This county became part of the duchy Holstein in 1640, was named “territory of Pinneberg” (in German: “Herrschaft Pinneberg”) and was under Danish rule.

For marking the neighbouring territories, border stones were put up. One of these stones is still located in Hamburg-Eppendorf in close vicinity to the district of Lokstedt.

The inscription can be decoded

After learning the history of Hamburg and Holstein, the meaning of the inscription mentioned above can be decoded: The letters “HP” are the abbreviation of “Herrschaft Pinneberg”, „C7+“ refer to the Danish king Christian VII. (1766 until 1808) who was also duke of Schleswig and Holstein. In 1785 the granite stele was located between the Danish-governed Lokstedt and Hamburg Eppendorf, and it is the 13th of more than 40 landmarks of the former territory of Pinneberg.

By the way, a multitude of the former landmarks are still preserved today. 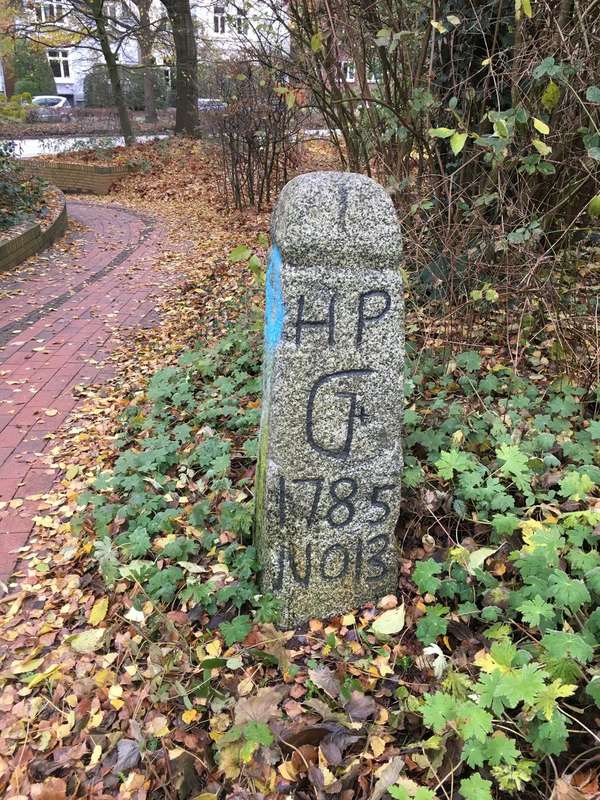