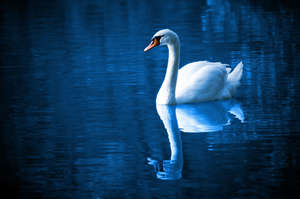 When you visit Hamburg there is a distinct difference between going for a walk around the Alster or along the Elbe. As a native your cultural milieu will factor quite a bit into the decision where your steps will lead you. The same can be observed for the local soccer teams HSV and St. Pauli or if you live on the “right” or “wrong” side of the Alster.

Even if it looks like it: Outer Alster (Außenalster) and Inner Alster (Binnenalster) are not actually a lake but a tributary river of the Elbe which was backed up to drain the surrounding marshland. Past generations could swim and bathe in it, but this is nowadays unadvised. While the water quality is generally high, boat traffic and the occasional piece of floating debris or filth are detrimental to boisterous behavior. If you can, try to sample some of the “Alsterwasser” (literally translated as “water from the Alster”) in a bar, which is beer mixed with lemonade and is probably the closest to the experience you should come.

The Alster itself can rather be enjoyed visually – the water, the fountain, the boats and the swans. Speaking of which: The swans of the Alster have been bred and cared for for centuries. At the end of the 16th century the hansa town provided them with oats and barley, even in times of famine they had daily grain rations. This care was brought even further at the beginning of the 19th century where Hamburg appointed a “Schwanenvater” (father of the swans) who was responsible for the wellbeing of all the 170 birds that reside on the Alster in spring and summer.

Now, in late autumn when the days get noticeably shorter the Schwanenvater herds his flock together and ferries them by boat into their winter habitat, the Eppendorfer Mühlenteich. Here Hamburg’s living emblems overwinter with other waterfowls on a body of water that is kept clear of ice. When one falls ill or is injured they will be treated at the medical station.

This tradition has been cultivated for centuries beginning in the times of the Hansa. Between the 12th and 17th century the Hanseatic Leage was an influential confederation of merchants in Low Germany. Their aim was to ensure safety of the trade routes and the protection of mutually beneficial economic interests, especially abroad. Throughout this time the city fathers were of the conviction that Hamburg would stay in the Hansa as long as there were swans that belonged to the Alster. They are therefore a political symbol of Hamburg’s independence of the German Reich and treasured highly, as it became a punishable offence in 1664 to harass them.

So while it is not advisable from a legal standpoint to annoy the birds (though it is questionable if anyone would prosecute any offences) meddlesome passersby run the risk of being pinched. That may be funny to bystanders but it can hurt quite a bit.

Hamburg is not the only city that embraced an animal as an emblem. Just think about the ravens of the Tower of London. For centuries a ravenmaster has kept kept at least six common ravens und cared for them. This has not always been treated as a matter of course though. Charles II was about to put them to death because his astronomer John Flamsteed complained about bird droppings on his telescope. But when the king caught wind of a legend that foretold the end of the monarchy and the whole kingdom were the ravens too perish or leave the Tower he changed his mind. And so they have remained where they are for generations.