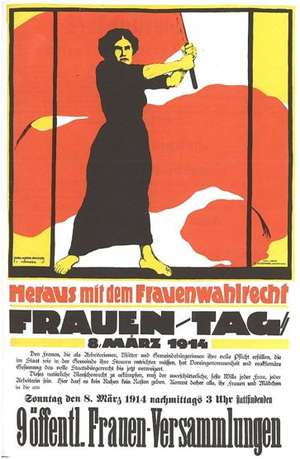 Although there is a lot yet to be done in the area of gender equality, a lot has changed in the last one hundred years: While today a woman, Angela Merkel, is the head of Germany’s government, women did not even have the right to participate in political elections until far into the 20th century. Much less did they pursue a career: When, in our genealogical research, we work with documents from the 19th century or earlier we very rarely encounter women who carried on a profession. Responsibilities were clearly divided back then.

Not until the years 1910/11 did an organized protest form against this inequality in Germany and other countries. It partly developed out of socialist organizations and demanded more rights for women. The meetings and rallies which took place at that time were the origin of International Women’s Day: After having taken place on 19 March 1911 for the first time, International Women’s Day eventually was scheduled to be on 08 March 1921.

It should not be surprising that the National Socialists forbade Women’s Day without further ado and later the Federal Republic of Germany did not show any interest in supporting Women’s Day either. It was the United Nations that finally declared one day a year as “UN Day for Women’s Rights and World Peace” in favor of women.

While the International Women’s Day wasn’t very important in West Germany, it was celebrated in the former German Democratic Republic. Until today it is more common in East Germany to congratulate a woman or to give flowers to female employees on this day.

By the way: There is also an International Men’s Day. This, too, is equality.