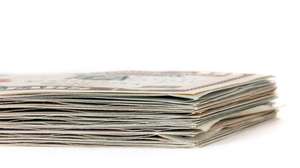 Not only 50 Million Americans have German ancestors – the Dollar has German roots as well!

This is due to the fact that mining in Germany made a lot of progress in the 15th century and that through the “discovery” of the new world more and more silver made its way to Europe. When gold became rare and more expensive, silver was the choice for coinage. Gold had a higher worth than silver though and as the silver gulden was to be of the same value as the golden one, it had to be nine times as heavy as the gold gulden. A silver gulden weighed 30 grams and was called “Guldiner”, a word close to “Gulden”.

On the south slope of the Erzgebirge there was silver mining in the 16th century as well. Since 1519, the counts Schlick let workers produce vast amounts of “Guldengroschen”, golden coins. These coins were also named “Joachimsthaler” after their origin in Joachimsthal in North Bohemia. After a while, the name was shortened to “Thaler” or “Taler”. In the mid 16th century this became the name for silver coins of this particular size category.

When you mix a little Low-German into the word “Thaler”, you get the word “Doaler.” Inside and outside of Germany, this word became very popular.

Two and a half centuries later, when the United States of America parted ways with the British currency system and wanted to establish their own, the word “Dollar” was chosen, based on the “Doaler”. Today there is not only the U.S. American Dollar, but 23 other Dollar currencies, from North America to Suriname, from Namibia to Brunei, Australia and New Zealand. That is a long way from Joachimsthal in the Erzgebirge!

By the way: The American Dollar matched the Spanish/Mexican silver Peso, and thus the dollarsign was the “$”.