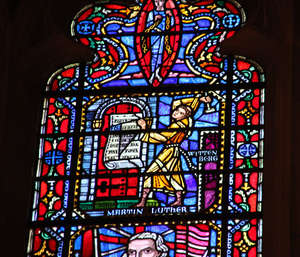 Detail of a church window in the War Memorial Chapel at the Washington National Cathedral in Washington D.C. Martin Luther nails his 95 theses to the church door in Wittenberg. Picture by Tim Evanson [CC BY-SA 2.0 (https://creativecommons.org/licenses/by-sa/2.0)], via Wikimedia Commons (https://commons.wikimedia.org/wiki/File:Clerestory_window_12_-_War_Memorial_Chapel_-_National_Cathedral_-_DC.JPG)

On 31 October 1517 Martin Luther is supposed to have nailed his 95 theses against the sale of indulgences to the door of the church in Wittenberg. Today it is debatable, if this really happened, but for many the date still stands for the beginning of the reformation. It is celebrated as Reformation Day in Germany and Austria. 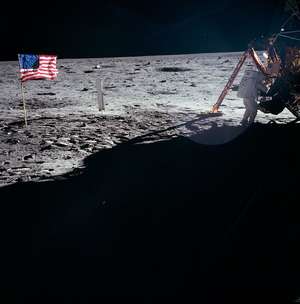 There are good reasons for being sister cities. Both are characterized by their waterside location (at Lake Michigan and the Elbe), despite at the same time being located at the inland. They are both economical as well as cultural centers and there are furthermore historical parallels and connections. Just to mention it briefly, both cities were affected by great fires (Hamburg in 1842, Chicago in 1871) that changed their appearances permanently. But most of all, both cities played an important role in the migration from Germany to America in the 19th century: Hamburg as an emigration harbor, Chicago as a place of refuge for immigrants. 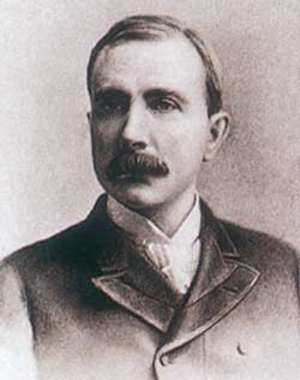 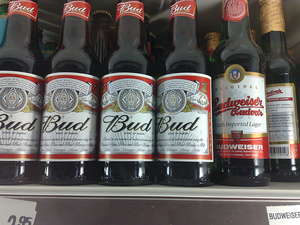 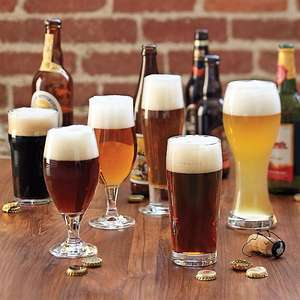 The favorite beverage of the Germans? Beer! At least that’s the cliché. There of course is reason to that. One is certainly the “Reinheitsgebot” (German beer purity law) that supports the good reputation of German beer. It was passed on 23 April 1516, therefore every year at that day, German Beer Day is celebrated. The beer purity law is the oldest food law in the world. It states that German beer can only be made of water, hops and barley. The role of yeast that influences fermentation wasn’t understood at the time. Today adding yeast allows a constant quality of the beer. Prior to the German beer purity law, many things were mixed into the beer to for example add a special flavor, heighten the intoxicating effect or to make beer drinkable again that had turned sour. The first verifiable predecessors to this law can be found in 1156 in Augsburg.